Depending upon the levels of contamination introduced into the system the waste stream may contain very low levels of solvent. The option of additional by-pass distillation remains available to further concentrate the contaminants. In fact a small amount of solvent in the waste stream is beneficial in order to maintain fluidity and avoid the build up of a viscous sludge. The object is to maintain a closed loop operation where the operator has no contact with the solvent or waste stream. 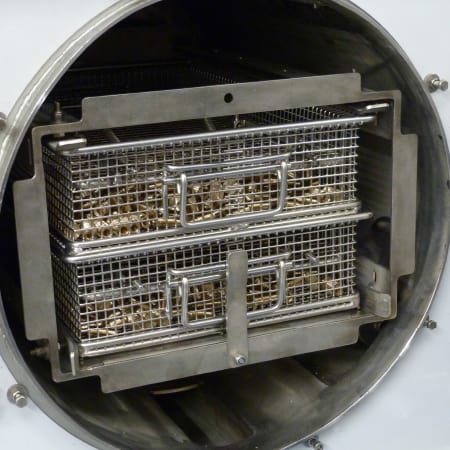 Important international standards regulate and limit the maximum levels of both fugitive emissions (into the workplace) and atmospheric discharges. In the case of perchloroethylene, the consumption limit adopted is 100 g/h.

More specifically, EU directive 1999/13/EC (“The Solvent Emissions Directive”) and the UK’s domestic legislation The Solvent Emissions (England and Wales) Regulations 2004 indicates a maximum limit of 20 mg/m3 in the event of consumption exceeding an excess mass flow of 100 g/h.

In addition to this, EuroNorm 12921/4 requires that residual chamber concentration is reduced to <1gm/m3 prior to the door mechanism permitting operator access to the chamber.

You can find out more about which cookies we are using or switch them off in settings.

This website uses cookies so that we can provide you with the best user experience possible. Cookie information is stored in your browser and performs functions such as recognising you when you return to our website and helping our team to understand which sections of the website you find most interesting and useful.

If you disable this cookie, we will not be able to save your preferences. This means that every time you visit this website you will need to enable or disable cookies again.